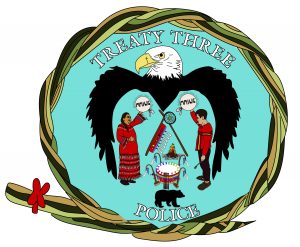 “The art piece was created in collaboration with the Grand Council Treaty #3 Women’s council, Elder Howard Copenace and MMIWG family member and advocate, Sharon Johnson.  We’ve had several virtual meetings during the past few months. The designer for the graphic is a Couchiching band member, Fallon Simard who assisted us with bringing together the group’s final ideas.  The group was very cooperative and honoured to assist with creating such a decal for T3PS” says Smith.

“With the male image as an ally of MMIWG, the LGBTQ2 rainbow colours on the drum, this decal is very inclusive” says Chief of Police Kai Liu.

Deputy Chief Jeff Skye adds “When we went into this process we didn’t know where this would lead us. The group demonstrated proper protocols were followed that have been passed down to us from our ancestors. We are also very honoured to work with the GCT#3 women’s council, Elder Howard Copenace and Sharon Johnson.”

The idea for the decal was brought forward by uniformed T3PS members who wanted to generate discussions about MMIWG.

The unveiling of this decal coincides with the National Day of Awareness for MMIWG which takes place May 5th. The new vehicle decals will appear on T3PS vehicles this year.