The Recruit Constables are Brent Adams, originally from Mississauga, Ontario and Brandon Hamilton who grew up in Carrying Place, Ontario. Special Constables include Emily Hyatt from Fort Frances and Paige Randell from Marathon, Ontario. The staff who were recently promoted are Sergeant James Broughton who has been a member of T3PS for sixteen years, Detective Sergeant Stephen Garrow who has been a T3PS member for seventeen years, and Staff Sergeant Tricia Rupert who has served at T3PS for fifteen years.

Honourary Junior Chief of Police Dian Green is a member of Iskatewizaagegan #39 First Nation and the grandson of T3PS Constable Gary Tom. Twelve-year-old Dian Green was diagnosed with cancer this year, for the third time in his life, the first time being when he was two years old. At today’s event he was presented with a Star Blanket from his family made in the NHL’s Pittsburgh Penguins’ colours – his favourite team.

Cassidy Copenace, a member from Onigaming First Nation, was commissioned a beaded medallion with the T3PS Office of the Chief of Police logo and presented it to Police Chief Kai Liu. 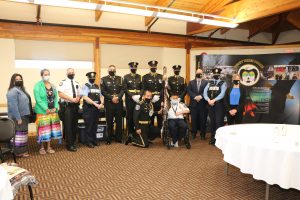 T3PS Participating in Coldest Night of the Year 2022