(Kenora) – Treaty Three Police Service had the honour of conducting a swearing-in ceremony for Dian Green, a 12-year-old member of Iskatewizaagegan #39 who is undergoing treatments for cancer. Green has been battling cancer since the age of two and currently resides in Winnipeg with his mother Rachel, father Dylan, and siblings. Honourary Constable Dian Green was joined at today’s ceremony by his grandfather T3PS Constable Gary Tom.

“We are using police vehicle number 17-566 for Dian’s first patrol. The number has significance in my family as it represents our hockey numbers and also has the bear decal on it which is our family clan. It has been a longtime dream of his to become a police officer just like his grandpa” says Constable Tom, a member of T3PS since 2003.

Chief of Police Kai Liu presented the police badge and certificate welcoming Dian to the T3PS ranks: “Dian had no choice but to be brave for a long time. It is a privilege to induct him into our service knowing his courageousness and devotion to policing.”

During his treatment this year he got to virtually meet his hockey idol Pittsburgh Penguins’ Sidney Crosby. Dian and Crosby both have matching beaded medallions crafted by his mom as a result of this meeting. 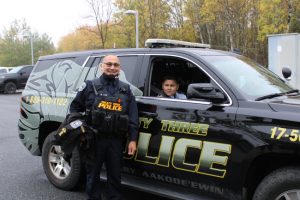 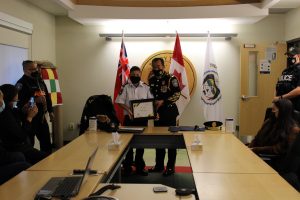