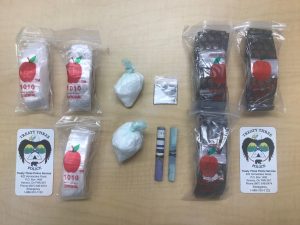 (Grassy Narrows, Ont.) – On Thursday February 25th, 2021 Members of the Treaty Three Police Service’s Street Crime Unit, Grassy Narrows detachment and the OPP conducted an investigation into the sale of controlled substance in the Grassy Narrows First Nation resulting in two people being charged and the seizure of cocaine.

Members of the service are reporting that officers seized Cocaine with an estimated street value of $5000 and items related to the sale of Controlled Substances.

As a result of this investigation two males from the community (ages 27 and 24) have been charged with possession of a schedule one substance for the purpose of trafficking.  Both have been released from police custody and due in Kenora court at a later date.

With the growing concerns of illicit drugs in the Frist Nation Territories, the Treaty Three Police Service is mandated to identify local community drug dealers, investigate their illegal activities, and lay appropriate charges.

The public is reminded to please contact Treaty Three Police Service with any information regarding the illicit sale of controlled and illegal substances or to contact Crime Stoppers at 1-(800) 222-8477 (TIPS).